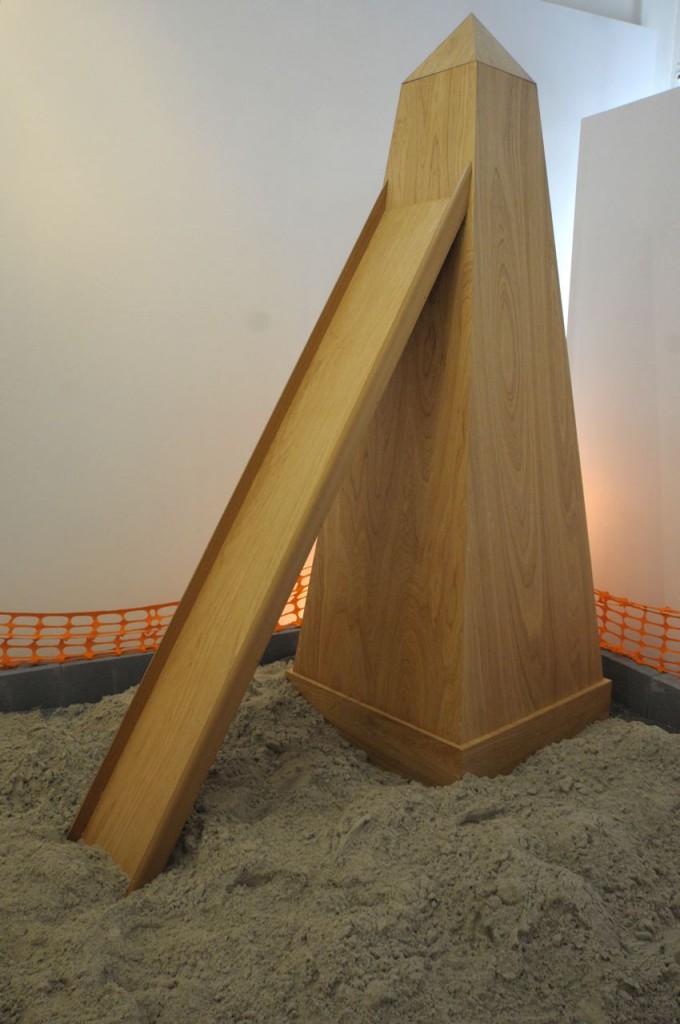 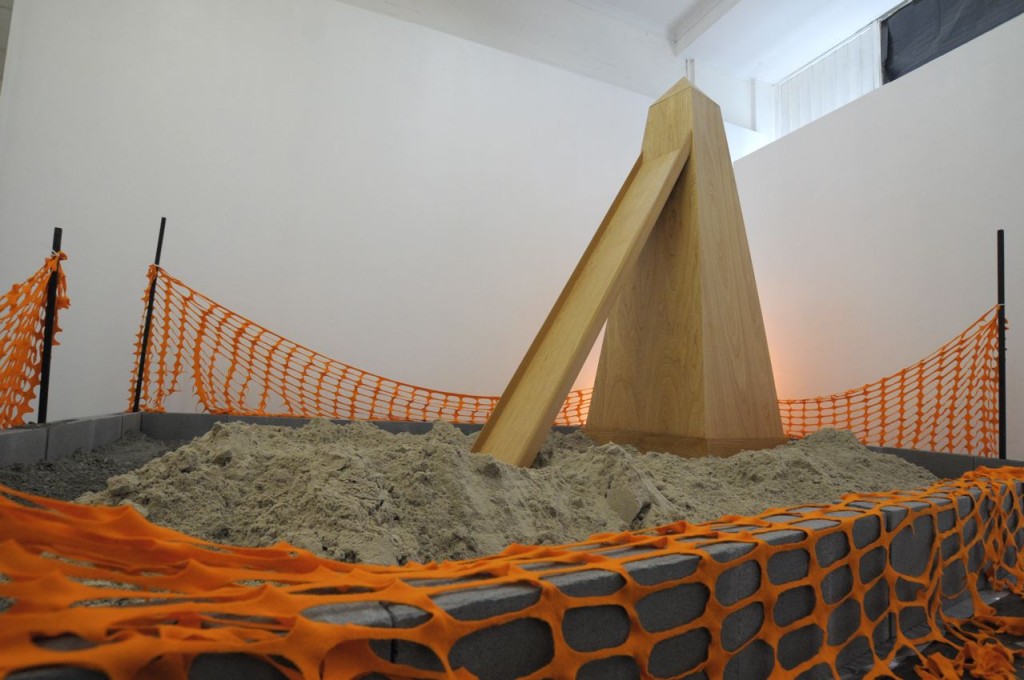 Cosmodromes are Russian space stations, reminiscent of that vainglorious era when the Soviets could boast of being world beating technological innovators. All those resources devoted, at the expense of basic needs, to an imagination-capturing enterprise with very few practical applications — as NASA itself admits, the space program is about propelling the dreams of human achievement, and associating those dreams with national pride. All that time, money and energy harnessed to bolster an ideology, and to further an enterprise that ultimately failed along with the Soviet ‘dream’.

That massive investment in an all-consuming project that serves to keep existential doubt at bay, but whose achievements are inevitably exposed as illusory, is an important point of reference for Philipa Veitch’s work. The artist has a long-held interest in the writings of French critical surrealist Georges Bataille, including his critiques of the ideologies that underpin Western philosophy and capitalist societies, and in particular his condemnation of ‘project’ as a means by which society controls individuals and curbs their potential. In Inner Experience (published in French in 1943, first English translation 1988) Bataille parodies Hegel’s ‘positive’ philosophy of work and utility, and the Hegalian man, who ‘is accomplished, is completed in the adequation of project’. Against this positive philosophy, Bataille posits an experience of incompleteness, playfulness, and uselessness. In this ‘unemployed negativity’, without function and without content, Bataille recognizes his own life in its isolation and insignificance. Against this excoriatingly modest and honest approach, the dreams of human greatness embodied in the cosmodromes appear all the more absurd and duplicitous. 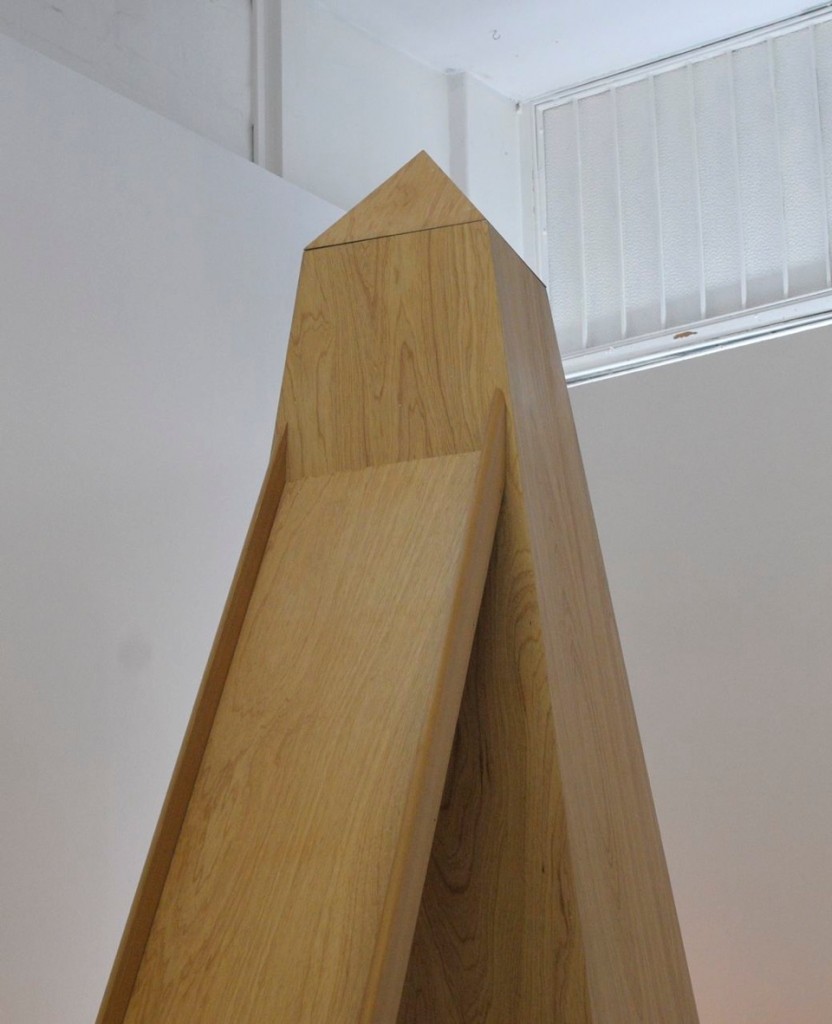 This interest in useless play, and how it is devalued in dominant discourses, has taken on a new resonance for Veitch in recent years since she herself had children. As she explored in her previous installation Statecraft (2008), from a very early age children’s natural propensity to play is harnessed for ‘useful’ ends, gradually becoming an integral part of measurable education outcomes and competitive performance. As a result, human creativity and imagination, rather than provide an outlet for freedom, for dissent and for difference, are from the time we are children instrumentalised for the bigger social ‘project’, for productivity and conformity.

In her first large-scale sculptural work, Veitch has created a striking monolith that combines historical monument with children’s toy, construction zone with playground. The archetypal memorial to significant human achievement is thus conflated with the archetypal symbols of the ephemeral and childishness. The sleek plywood structure tapers upwards like an obelisk, but its squat proportions keep it well grounded, as does what appears to be a straight slippery dip that leans against it. The formal lines of the structure are accentuated by the formlessness of the mound of construction sand and gravel in which it sits. The overall effect is confounding if compelling: the obelisk exudes an almost alien inscrutability, as if calculatingly unwelcome and judgemental, not qualities normally associated with fostering children’s play. The slide is inaccessible and set at a dangerously steep angle, while the hazard markers of a construction site warn us off.

Yet, on closer inspection the typical orange plastic netting turns out to be hand cut fuzzy felt, and the tenor of the work begins to change; the uneven mounds of sand start to seem almost inviting, in the way that unsupervised domestic construction sites in the past offered irresistible fun to neighbourhood kids.

Thus the work suggests that the possibility for ‘useless’ creativity still exists, despite the barriers that official discourses place before us, but to access it we need to force ourselves beyond our own naturalized conformity, our own self-censorship.

In an accompanying wall work, Veitch has underlined her central theme of the prescriptive nature of ‘project’ through the metaphor of the domestication of wild animals. In the trademark child’s medium of coloured pencils, she has rendered a fountain of dolphins in a purposefully naive style that resembles feel-good stickers and greeting cards. The dolphins high dive in the manner we are accustomed to seeing in Sea World spectacles where the animals’ raison d’etre has been reduced to entertaining humans. However, Veitch denies us access to the spectacle. By obscuring the image with brown packing paper (that wears the traces of an unsuccessful attempt to tear it off), the artist links the harnessing of the pure joy of living expressed by wild animals to the domestication we all suffer under the burden of ‘project’. These creatures are depicted in the semblance of play, but indeed what we witness is their labour to the exigencies of human demands.

Through erudite references, a good dose of humour, and well designed aesthetic effects, Cosmodrome affords us the opportunity to consider the ‘uselessness’ of play and to wonder what creativity cut loose from the imperative to ‘produce’ might be like.